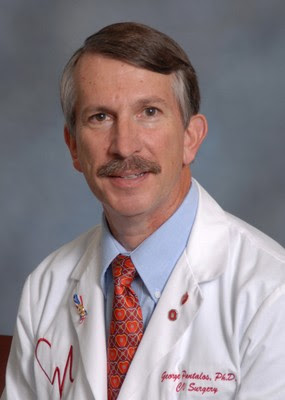 3 Abril | 15h - 16h
"Becoming a sea faring species was indeed a great challenge for our ancestors. But becoming a space exploring species is an adventure of another sort. With the upcoming human settlements on the Moon  and on Mars, there will be a significant increase in the duration of space missions. With days, or months separating us from earthling medical assistance, medicine will be tested to its limits. In this masterclass Prof. George will take you on an unforgettable journey through some of the most advanced biotechnological innovations in space medicine. How could we perform a surgery in space? Which new biomedical devices are needed up there in future space missions? What medical technologies does NASA assist astronauts? These are some of the questions Prof. George will consider you while he inspires you to reach for the stars!"
George Pantalos has been a cardiovascular explorer for nearly 50 years. Much of that effort has included the development of surgical devices and procedures to make the research projects possible. He has been a Professor of Cardiovascular and Thoracic Surgery and Biomedical Engineering at the University of Louisville, in partnership with Jewish Hospital and Norton Children’s Hospital, since July 2000, after holding similar appointments at the University of Utah for 17 years. His efforts to investigate cardiovascular function have focused on understanding and treating heart failure with mechanical devices including artificial hearts, ventricular assist devices, and cardiopulmonary support systems which he has helped develop, test, and implement clinically in patients with two legs and with four legs, with big hearts and with little hearts. George has also collaborated with NASA for many years helping to understand cardiovascular adaptation to the weightlessness of space flight and the return to Earth. George as flown 53 research missions on the NASA parabolic flight aircraft and led the development of a cardiovascular diastolic function experiment – that included an instrumented artificial heart beating on a circulation simulator – that flew twice on the Space Shuttle Discovery. Other reduced gravity research projects have included delivery of effective chest compressions for CPR in 0-G, organ perfusion in 0-G, and the development of surgical capabilities for exploration space missions. George started to donate blood with the Red Cross over 40 years ago in Columbus, Ohio. He is now a regular platelet donor with the Red Cross in Louisville and has served on the Board of Directors for several years, focusing on biomedical services. For nearly 10 years, George has worked with students at the University of Louisville to convince the FDA to eliminate the restrictions on healthy, sexually active gay men from being blood donors. Outside of his research, development, and public policy efforts, George enjoys traveling with his family, playing basketball and biking, being a weekend percussionist, volunteering with the American Red Cross, and making baklava. With his fellow students, staff, faculty, and patients, his motto has always been, “Share the adventure!”
Mais informações aqui.